Summer always brings great concerts with it.  Poison with Def Leppard was the first big show for me this season.  I saw both acts last year, with Poison opening for Mötley Crüe and Def Leppard touring with Heart.  Both bands put on an amazing live show full of energy and are always a great opportunity for any concert photographer.  I breathed a huge sigh of relief when I discovered this year that Poison was not a soundboard shoot as they were last year.  Last year it was most likely due to the fact that they were touring in support of Mötley Crüe, so Crüe got to call the shots.  (Crüe was a soundboard shoot again this year when they opened for KISS, which I opted out of.) 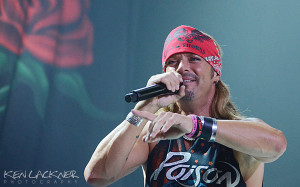 It’s always a treat when performers on stage recognize the photographers in the pit and work with them to give them great shots.  Bassist C.C. DeVille especially seemed to like me this year, and I got many great poses from him.

Although I never listened to any kind of metal growing up, and I’m not intimately familiar with Poison’s catalog, I know they always put on a great live show.  It was great to hear their classic tracks “Nothing But a Good Time” and “Talk Dirty to Me.” I was very pleasantly surprised to hear them cover Grand Funk Railroad’s classic, “We’re an American Band.”

This was my second year in a row photographing and seeing Poison, and I’d love to make it a tradition as long as they keep coming back to Atlanta!

View the entire set on Flickr and post on Atlanta Music Guide (which includes shots of Def Leppard).

As with most of the major arena and amphitheater tours, there was an abundance of light on stage throughout the entire performance.  ISO stayed at 2500 the entire shoot, with shutter speeds as fast as 1/500sec.  Although I normally switch to a telephoto for part of each performance to capture tight shots of each performer, I was getting such great results with the 24-70mm f/2.8 that I stuck with it for all three songs.  Fortunately the performers moved around quite a bit, and there was plenty of room for me to move from one end of the pit to the other that I had no issues capturing each performer with the wide lens.  Even the drummer was an easy capture when zoomed all the way to 70mm.