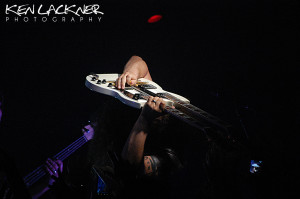 Coheed and Cambria at The 40 Watt Club in Athens. This shot may not have quite the epicness one would think of when imagining awesome concert shots, but in its own way, it is epic to me. The chance for me to capture this rare shot of frontman Claudio Sanchez playing his double neck guitar on Welcome Home was too good to pass up. Shot with my telephoto from the back of the club, as this intimate show was sold out and there was no photo pit to speak of. View the full set. 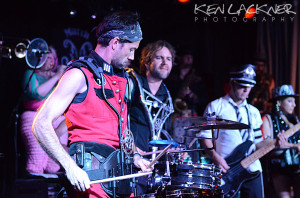 March Fourth Marching Band at Smith’s Olde Bar in Atlanta. Until just a few months ago, the marching band is something I associated with high school and college football. A friend convinced me to attend this show, and I’m glad I took the advice. View the full set.

Blair Crimmins and The Hookers at Mable House Barnes Amphitheater in Mableton. One of my favorite local bands for several years. I was very excited to see them play a big show at an amphitheater. This was a great shoot for me because I got to test drive my new 70-200 f/2.8 telephoto. View the full set.

Breathe Carolina play Warped Tour at Aaron’s Amphitheater in Atlanta. The summer festivals are always a great opportunity to discover new music, and this year was no exception. Shot in the middle of the afternoon on the main stage at Aaron’s Amphitheater at Lakewood, this set features no backdrop or set whatsoever, none of the fancy lighting that make the shots from major tours really stand out. Yet the composition and perspective of this shot easily land it in my collection of favorites from the year. Full set.

Taking Back Sunday play Warped Tour at Aaron’s Amphitheater in Atlanta. I’ve seen this band perform live several times, and this my second opportunity to photograph them. The bright afternoon sunlight made for some easy shots, and the expression on the lead singer’s face make this a great shot. Full set.

Barenaked Ladies at Verizon Wireless Amphitheater in Alpharetta. Long time fan, first time audience member. This mid-summer show was thoroughly enjoyable. Lighting at this venue is nothing short of excellent, making for some fantastic shots. Add the expression on Ed Robertson’s face in this shot, and we have a winner. Full set.

Slipknot headline Mayhem Festival at Aaron’s Amphitheater in Atlanta. To quote a fellow photographer who was in the pit that night with me: “There is epic. And then there is these guys.” ‘Nuff said. This is one of those sets from which it can be incredibly difficult to choose a single favorite, so click on the link to view the full set.

Poison at Aaron’s Amphitheater in Atlanta. It’s always great when a performer notices the photographer and works with him to give him great shots. C.C. DeVille did just that several times during Poison’s set. View the full set.

Mastodon at Masquerade Music Park. Atlanta sludge metal band Mastodon return home on the final stop of the Heritage Hunter tour, co-headlining with Opeth. Composition of bassist Troy Sanders along with the background lighting in this shot make it a favorite of mine. View the full set.

Counting Crows at The Tabernacle in Atlanta. At first, it seemed that this shoot was going to be somewhat of a challenge. There was no photo pit — the usual space separating the audience and the stage, usually about two or three feet deep — to speak of. Photographers were giving a choice of shooting from the soundboard at the back of the house or from the balcony. Nobody loves soundboard shoots, so we chose the balcony. These are the results.

The Fray at The Tabernacle. One of the best lit shows I’ve photographed all year. Or ever, really. Full set.

Iced Earth at The Masquerade in Atlanta. Prior to March, Atlanta metal fans have waited almost 8 years for the band to return. This venue rarely produces portfolio-worthy shots due to poor lighting, and as a result, I don’t often shoot there. This show turned out to be a pleasant exception. View the full set.

Shearwater at Variety Playhouse in Atlanta. Shearwater have become one of my favorite bands, and I’ve had the opportunity to photograph them many times over the years. They typically play at The EARL when they headline. This time, they were opening for St. Vincent. Jonnathan Meiburg never ceases to amaze me with his powerful vocals, and the expression on his face in this shot really captures it. Check out the rest of the shots and my review for Target Audience Magazine.

Def Leppard at Aaron’s Amphitheater. The lighting, the composition, and the expression on guitarist Vivian Campbell’s face make this shot one for the portfolio. Full set on Atlanta Music Guide.

Epica play Prog Power USA at Center Stage in Atlanta. Sometimes I think it should be called Hair Power USA, no?

Nightwish at Center Stage. Another perfect example of artist noticing the photographer. Couldn’t ask for much better than this. Full set on Atlanta Music Guide.

And that’s a wrap! 2012 has by far been the most exciting year for me thus far for concert photography. Here’s to an equally epic 2013!