Progressive rockers Coheed and Cambria once again brought their sci-fi epic known as The Amory Wars to life this winter with The Afterman tour in support of their new double album Ascension and Descension. A prequel to the band’s previous concept albums, collectively known as The Amory Wars, The Afterman tells the story of Dr. Sirius Amory as he sets out to explore a system of planets and stars known as Heaven’s Fence. 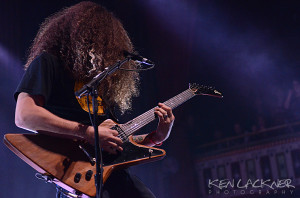 On March 5, the stage at The Tabernacle in Atlanta, GA was transformed into The Meriwell — Sirius’ ship, named after his wife. The artificial intelligence known as The All-Mother was present “every step of the way,” as well.  Before frontman and creative mind behind The Amory Wars, Claudio Sanchez, and the rest of his band took the stage, All-Mother spoke, and the crowd knew it was time for the journey to begin.  The band opened the set with the first two tracks from their latest album, The Afterman: Descension, released in February.  The show concentrated heavily on The Afterman, with more than half the tracks coming from Ascension and Descension.  With only a limited amount of time and the fans wanting to hear their new favorites from the latest chapter of The Amory Wars, the band had to ditch several staples from their setlist, including “Time Consumer,” “Everything Evil,” and “The Running Free.”

Released in October 2012, The Afterman: Ascension marked the return of original drummer Josh Eppard to Coheed and Cambria.  Long-time fans were no doubt excited to see him return to the stage.  (Although Eppard toured with the band in 2012 prior to recording Ascension, he wasn’t with them during their last major tour, when they performed their first album in its entirety on the 2011 Neverender Tour.) Zach Cooper stepped up to fill the shoes of original bassist MicTodd who left the band in 2011.

Coheed closed out the main set with the epic title track from their 2003 release, In Keeping Secrets of Silent Earth:3.  They returned to the stage for a 3-song encore that included two hits from their 2005 release, “Good Apollo, I’m Burning Star IV, Volume I: From Fear Through The Eyes of Madness, and the first single from The Afterman: Ascension. 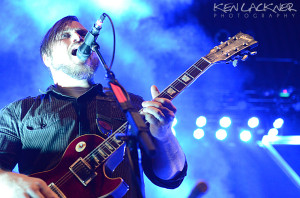 This was my fourth time capturing Coheed and Cambria, and one of the most challenging.  Lighting wasn’t entirely terrible, but could have been better for a major tour.  ISO stayed at 4000 for the entire shoot, with shutter speeds ranging from 1/60 sec to 1/400.  While I usually use a mix of the 24-70mm mid-range zoom and the 70-200mm telephoto, none of the shots in this set were captured with the telephoto.